Our friend and client Jenny, owner of Monkey-Toes asked us to created for her cutie patootie, Oscar, a farm themed party. We are thrilled that Jenny shared with us photos AND a write-up, which is also being featured today on CupcakeMAG For Littles. As an added bonus, Jenny has graciously offered to give away one pair of shoes for your little cowboy or cowgirl! 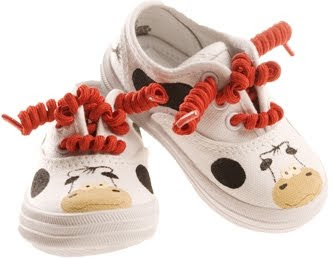 Oscar sported at his party these adorable Wowie Cowie shoes but there are plenty more to choose from!
Take it away, Jenny!

MOOOOO-VE over bland 1st birthday parties, here comes OOOOSCARS! Oh how much fun I had for this barnyard bash. I had many nights of insomnia with the list of “to dos” running through my head, so I found myself waking up at 5 am (which is completely unheard of for me – I’m an 8am to noon-ish kinda gal) getting busy. Cutting, taping, drawing, hair and finger nails flying (added the last one for a fun visual). All this hard work paid off when I heard the oooohs and ahhhhhs at his party!

So here it is. The long awaited Oscar’s first birthday party which was a HUGE success. (Even the hubs *admitted* he enjoyed it, and he was non-stop rolling his eyes at everything for the past 3 weeks – his eyes must HURT!) The details, which MADE the party, were supplied by Anders Ruff Designs and I couldn’t be more happy with their work. EVERYONE commented on the little bits scattered throughout the party. I thought it was adorable for Oscar to have his own logo. The (barn) stage was set with the invite, and everything from there coordinated. Can you say AH-DOOR-ABLE?? 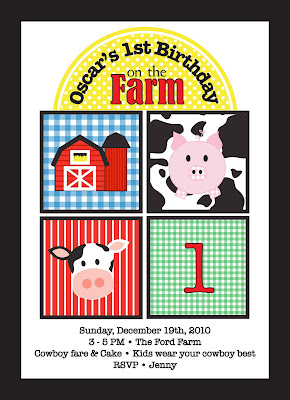 I had so much fun playing dj on itunes by creating a mix of Oscar’s Barnyard Beats. I had a little cowboy theme going with Wild Wild West (Will Smith), Dixieland Delight (Alabama), Should’ve been a Cowboy (Toby Keith) and tons more. I hope the kiddos enjoyed them on their ride home, and hopefully it didn’t drive the parents nuts by being to kidd-ish. Along with the cd’s, each cowpoke received their very own adorably hand decorated farm animal sugar cookie. Aren’t they sooo cute! They could choose from a horse, barn, cow, pig, chick or sheep. And they were quite yummy too! All created by Truly Scrumptious Cookies – so many fun designs. See those “winner” bags? Those are for the pin the tail on the donkey and pie eating contest winners. Oh the kiddos had so much fun playing. And of course, no farm party would be complete without Monkey Toes Wowie Cowie tennis shoes. I initially had the shoes, and Oscar’s non-traditional birthday hat – a cowboy hat - sitting on the entry table and then moved it on to the kids table to act as the centerpiece. Oscar did just what I suspected he would once I put the hat on his head, he grabbed it, smacked everyone in the face with it and then threw it to the ground. Gotta love 1 year olds! 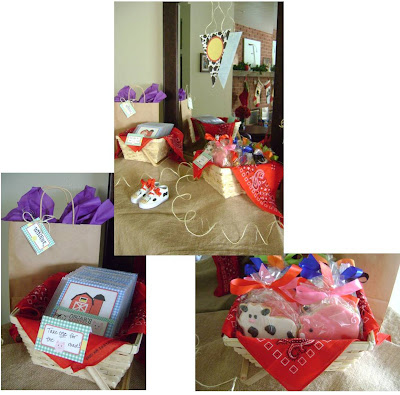 I tried to make the party space look as much like a barn as I could, so we held the party in the garage. I figured all the pots, tool boxes and lawnmower, etc were perfect “décor” for a barn, right?! I just incorporated it all into the scenery. We even strung lights across the ceiling of the garage for a “ho-down” kinda feel. I LOVE it, so much that I think I will leave them up – it’s like a party for our cars every time we drive into the garage. The wheel barrow was the perfect place to house the cold beverages! Look how cute those “Got Water” labels turned out. I heard many whispers of “oh my gosh, I can’t believe Oscar has his own water bottle labels, how CUTE!”. 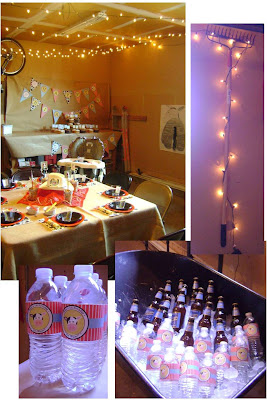 The kiddos were greeted with their own burlap covered table filled with all sorts of goodies, when they walked into the garage – oops, I mean BARN. Each lil cowpoke had a cowboy hat with name tag, and their tagged cups dictated where they would be sitting (ah, this left out any arguing over who was going to sit by who! Crisis averted - Yay me!!). I had this bright idea for centerpieces in the middle of the night – a mason jar filled with animal crackers and peeking out – a colored pencil topped with the cute little tags made by Anders Ruff. EASY PEASY! And cute to boot! (HA! I am a dork). And since Oscar would chuck his hat any time it was near him, it sat in the center. 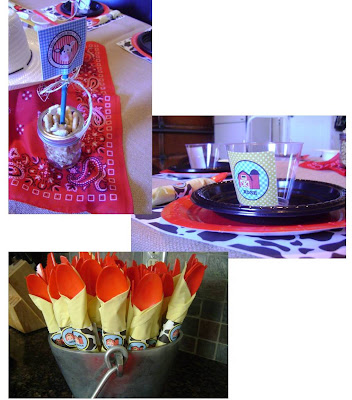 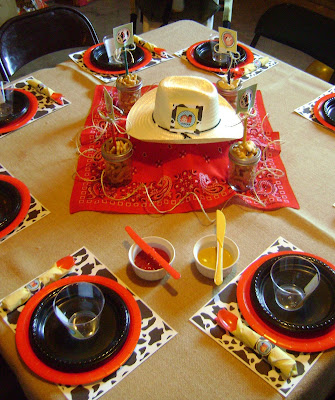 For games, I really wanted tons of giggles from the kiddos so we went back to basics. A good old fashioned game of pin the tail on the donkey and a pie eating contest. I drew the donkey, my oldest daughter colored it, and made the tail by cutting a ton of fuzzy yarn and hot gluing it to a square of card stock. The kids had so much fun being spun around and around – I was amazed at their pinning skills! All the kids helped out and were squealing. The pie eating contest was a hit too! Of course I wouldn’t let them use their hands. HAHA! Whipped cream EVERYWHERE! They loved getting a little messy for a good cause – a clean plate. To make bibs – I cut plastic shopping bags in half and the handles served as the ties. Cheap, easy and fun! 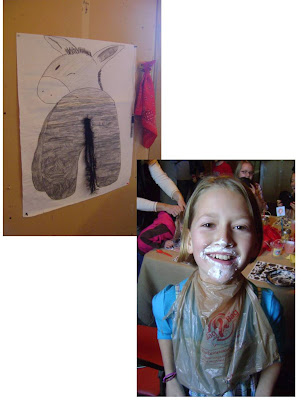 Ok, Ok, on to the most important thing at a birthday party – CAKE! I decided not to go the traditional route of a giant cake, I went with mini err, gigantic cupcakes from Costco (GASP! Don’t knock it until you try it, their cakes are DEEE-LISH!) I’m a cake person, if you can’t tell. To make things easy on me, so I didn’t have to do any baking or re-frosting, I decided to just add a toothpick to those cute little tags and slap them right on top of the store-bought cupcakes. Again, easy, and made a great statement. I even created cow print placemats from some of the Anders Ruff printables they sent. 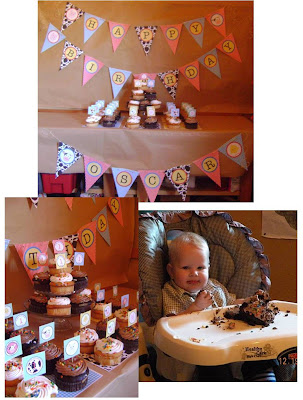 And lastly, we cannot forget the birthday boy and his first GIANT cupcake! I think he was a little overwhelmed by this monstrosity, but we all coerced him into eating it. And that he did! (Oscar is definitely my child with the way he smashed that cake into his mouth) He was so messy we had a “hay-day” (pun intended) getting him clean again. I swear with a toddler you need a disposal installed on the tub.

I’m pretty sure Oscar had a great time at his party. Ok, he had no idea it was his party, but he didn’t cry, scream or throw any tantrums, so I am taking that as a “I loved it” stamp of approval! 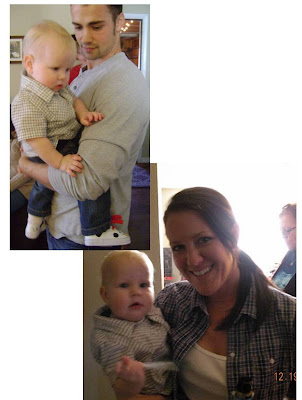 Thank you to Anders Ruff who provided me with all of the gorgeous printables for this party! I would have NEVER been able to pull this all together without you!! And now on to the next party in March - YIKES.

One pair of Monkey-Toes Tennis Shoes or Mary Janes (Infant/Toddler). You may pick the style depending on availability. Here are two examples: 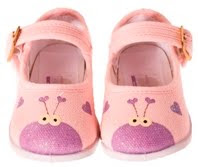 • Visit Monkey-Toes or their new outlet store and leave us a comment below telling us which pair of shoes you will choose if you will.

For Additional Entries* (not required but extra ways to win!)

{*For each of the additional entries, you must leave separate comments here (on our blog) specifying what you did. We will verify the additional steps if you win!}

Open to US residents only

Email ThisBlogThis!Share to TwitterShare to FacebookShare to Pinterest
Labels: Birthday Parties, Straight From The Studio

I have to say the silly monkey sneakers are just adorable!

FYI- the link you have on the giveaway portion is incorrect.

Oh My! I just have to have a pair of those monkey sneakers for my little boy! ADORABLE!

Monkey Toes store link is taking us to the flour pot cookies site. :)But I have always wanted to lady bug shoes for DD. They are precious.

I "liked" Monkey Toes on FB.

I followed CupcakeMAG For Littles' Blog

I would choose the sill monkey shoes or the luv bug mary janes. thecoolkidsblog.com

I would pick the monkey toe tennis shoes!

so darn cute, i love the mary janes!!

I would choose the Spunky Spiders - so cute!

Oh how cute!! My granddaughter would luv the Luv Bug Mjs. Thanks.
dawnnewsome at yahoo dot com

Love the monkey ones!! So cute, my boy would love the laces!

I'd love the mary janes!!

I'd choose the LUV bug mary janes in size 2

I love the Boogie Monsters.

I would choose the "flutterflies" for Ellie Grace. That is her funny, sweet little personality summed up in curly laces and cuteness!!

I would choose the Luv Bug MJs
pica_princess_88@yahoo.com

I would choose the Luv Bug MJs
pica_princess_88@yahoo.com

I love the lady bug shoes with the curly laces. So cute!

I'm now a CupcakeMAG For Littles' follower; didn't even know they had one!

Awe I love this giveaway!! The wowie cowies are the cutest!

I would choose the Luv Bug Mary Janes. Too Cute
pica_princess_88@yahoo.com

Or perhaps desired some cash, pożyczka bez bik still solely don’t contain it right up until wage day? This takes place pożyczka bez bik for you to enormous People across the country everyday. A specific thing arises and you just require kredyty oddłużeniowe some coinage, but your test isn’t laid down though. Anxieties pożyczka bez bik it has a way to pożyczki bez bik find a payday advance loan internet, ideal?

retin a online retin a 0.1 cream - buy retin a usa