I have 2 boys and when I found out about Georgia Blue on etsy, that was almost enough motivation for try for baby #3 (in hopes of a girl), even though we say we are done. (Clarification - we are NOT trying) The shop has some of the cutest and stylish hair accessories around!

Georgia Blue is the place to go for handmade hair accessories for babies, children, teens and adults! They are so versatile and stylish. I can't wait to show off some eye candy. (There is a LOT of it!) I can totally see myself getting addicted to her shop!

Heather, the owner of Georgia Blue, creates a variety of types of hair accessories. Bows, hair rosettes, headbands, clippies and hairpins... beautiful enough to make you want to buy one of each!


Check out these GORGEOUS creations from Heather's Georgia Blue shop on etsy!

Any color you can imagine! Wool and cotton and wonderful!
These rosettes come as a clippie but you can request a skinny headband, too! 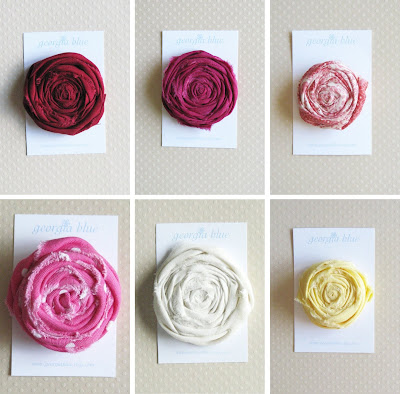 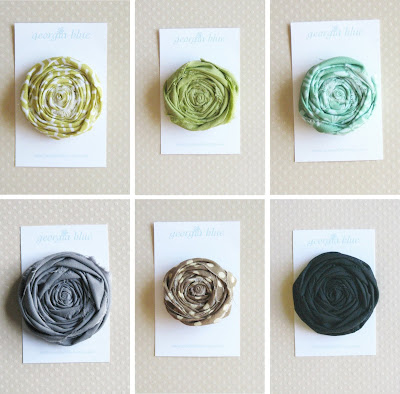 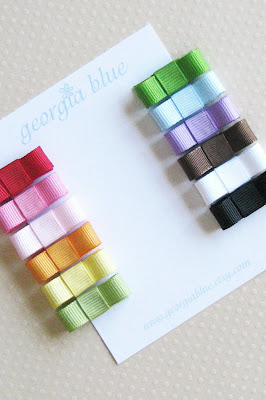 How beautiful - wouldn't these be wonderful to top off a present for a birthday or shower? Or what about having a makeover party and giving them as favors to each little girl. Talk about heaven! 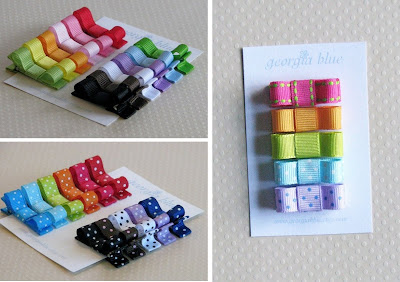 I just love these cotton flowers, too! 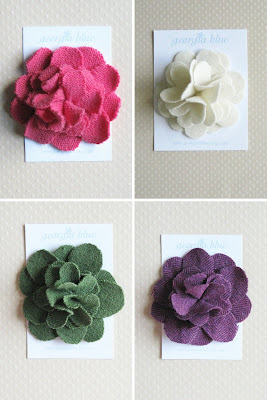 With the holidays just around the corner, these would be PERFECT for any holiday attire (for you or your little girl!) 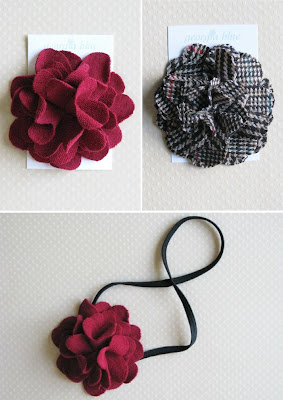 We are THRILLED that Heather has offered to giveaway a $30 gift certificate to her shop! Enter for your chance to win! 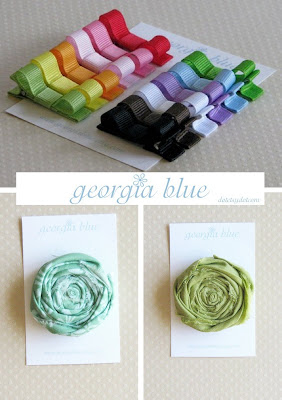 First Way To Enter
• Visit Georgia Blue on etsy and leave us a comment below telling us
about your favorite product.

{*For each of the additional entries, you must leave separate comments here
on our blog telling us you did the specific step (or already have done that step)
We check to see if you did the step if you win!}

Winner will be chosen using random.org on Friday at 11:00 AM.
Open to US residents only.

The winner has been chosen for this giveaway!
ERIKA (Comment #53)

I LOVE the clippies! there are so many of them, it would def be a hard choice!! :)

I just love the flowers! Gorgeous!

I love all the cute headbands. So girly girl!!! SO CUTE!

I love her rosettes, it was so hard to choose a favorite! Mint Raspberry Cream is super cute though!

I love the rosette headbands! I might have to buy one... or two!

I love the blackberry flower, what I like even more is that I can order it on a headband. My daughter refuses to wear barrettes in her curly golden locks!

I posted about the giveaway on FB, (Sara Gauvin Dandy) and I 'like' Anders Ruff!

and I 'like' Georgia Blue on FB as well!

I love the Hot Chocolate Headband! So cute!

I love the frayed rosettes on a headband. Gorgeous!

I really love all the clips and headbands but I really really want to get the upcycled purple wool flower in the herringbone pattern fr my daughter! Adorable!

Such cute stuff- I would love the orchard blossom rosette.

Love the itty itty clips! There's one to match every outfit on my little girl=)

i really like the wool flowers and i think the ginger and the blackberry are my faves!

I like the Meadow Cotton Flower Headband. So fresh and beautiful for Fall and all year.
pica_princess_88@yahoo.com

I love the gray rosettes. I could see myself stealing...ummm I mean borrowing them from my daughter.

I LOVE all of the flowers...

I like both of you on FB! I had to search for you on FB, though. You're direct link up top doesn't work.

That is, the link when you state like GB and AR... the AR FB link doesn't work in that sentence....

I love the orchard blossom headband in that deep cranberry color. Perfect for fall!!

Who wouldn't love Georgia Blue! My favorite is the Kasmir Cream Flower on a chocolate headband (for baby of course)...how sweet. And Maureen...we went for baby #3 and got our GIRL! You never know...

Lemon drop is to die for!

The Robin's egg is so cute.

CLOTHED MUCH, a modest fashion blog

I love the paisley one. shanneman at gmail dot com

Following you via google friend connect shanneman at gmail.com

My favorites are the Buttercup and Audrey! I just LOVE her stuff!

I am new to Anders Ruff and am a big fan already! Became a fan on facebook!

I love the polka dots! Would be super cute on my Clara Pearl :)

I love the classic black!

I love the rosettes. I know I would wear a neutral color the most, but I love the buttercup.

I love the Chocolate Cupcake rosette! She has such wonderful stuff....

I'm a fan of you & Georgia Blue on FB

Fan of Georgia Blue and Anders Ruff on facebook.

Shared on fb! Her bows would go great with their Halloween costumes!

I am following Georgia Blue and Anders Ruff on Facebook.

I tweeted about the giveaway.

I blogged about the giveaway.

I absolutely love the Ginger hair clip! I also like the little hair clips in all the primary colors for my grandbaby.

just stopping by to say hi

http://reidmoody.com/#92465 is 6 mg of ativan too much - ativan withdrawal infants

Start working at home with Google! i think It's by-far the best job I've had. Last Wednesday I got a brand new BMW since getting a check for $6474this - 4 weeks past. I began this 8-months ago and immediately was bringing home at least $77 per hour. I want to work through this link, go to tech tab for work detail.. Best Home Jobs

Now You can Watch atest funny videos, and Read articles about World and Health problems just click on the link.
Funny Videos and Live streaming

Do you want to get informed about Latest Political News?? Just Click Here --> RWBNews